Within the WE LOVE AI project I was working as a Conversational Designer.

I mainly used to gather information from different departments within Deutsche Telekom like System Architecture, Development or Service Agents to understand the topics and translated them into user-friendly conversational elements within the Digital Assistents.

For the realisation I was working together with Data scientists and developers to achieve a pleasant user experience.

An important part in my creation process is always building prototypes to achieve a base to discuss on with team members and stakeholders.

Tinka is the digital virtual assistant of T-Mobile Austria in form of a chatbot.
The new Version launched in spring 2017 is now able to understand the customer via natural language processing even better than before.
Additionally it got a complete redesign and much updated content.

My responsibility was mainly the user experience design and the structural architecture behind the new contents, which were then transformed by me into dialogues to establish a pleasant user journey through the communicated information.

Tinka Voicebot
Proof of Concept for an IVR integration

This proof of concept tries to integrate the virtual personality of Tinka as an interactive assistant into the hotline of T-Mobile Austria.
The goal of the digital assistant is to understand and solve the customer’s problems via natural language processing, to supersede the currently used IVR-systems.

I developed the conceptional systems behind the dialogues in a close cooperation with the user research team to provide a user-centred approach.
For this I also developed a framework with speech synthesis functionalites to establish a rapid prototyping workflow, which enabled the team to interactively adapt in every situation (for example within user testings) to achieve the most detailed user insights possible.


The User Needs tool is a web application which is supposed to support Design Thinking processes within Deutsche Telekom.
It can be used to collect User Needs in beforehand of a workshop to speed up the gatherting of information and also involving input from stakeholders who are not able to attend directly in the process.

As only UX Designer on this project my responsibility was very wide from the ideation process until the handover to the development in corporation with a Visual Designer.


The internship for my bachelor diploma brought me to Telekom Products & Innovation where I was working for the messenger app immmr.
This messaging service tried to rethink the way we communicate via smartphone and web. It included concepts like virtual SIM cards or multiple phone numbers, accessible via a simple login on every device and every browser.

My main fields of working included UI- and UX-design and I also used my knowledge about prototyping regularly to proof my concepts to the team.


For my bachelor thesis in communication design I wanted to find the borders of the topic I was studying for the last four years and explored the then very hyped topic of less- and also completely non-graphical user interfaces.
My goal here was to find out the consequences for the until then mainly visually defined field of designers.

I first created a three phase model based on visuality in the theoretical part of the thesis, to establish a vocabulary and make prognosis based on the status quo.

Later in the practical part of the diploma I tried to prove the propositions I made with the help of experimental prototypes. Therefore I worked with several technologies including Arduinos, EEG-headsets, Backend-Development, Chatbot-frameworks and in the end also a bit of visual UI-Design.

sehen und ernten is a student-founded initiative to get bring practical job experiences to university.
Besides making first experiences with working on freelance jobs and managing clients, we organised workshops, panels and other events or visited conferences together to enwiden our network.


I was mainly responsible to establish and maintain our IT infrastructre but I also were an active member in designing our office and other group activities.
As well I made my first professional experiences in Web and Corporate Design already in my third study semester, which brought me early confidence in handling with clients. 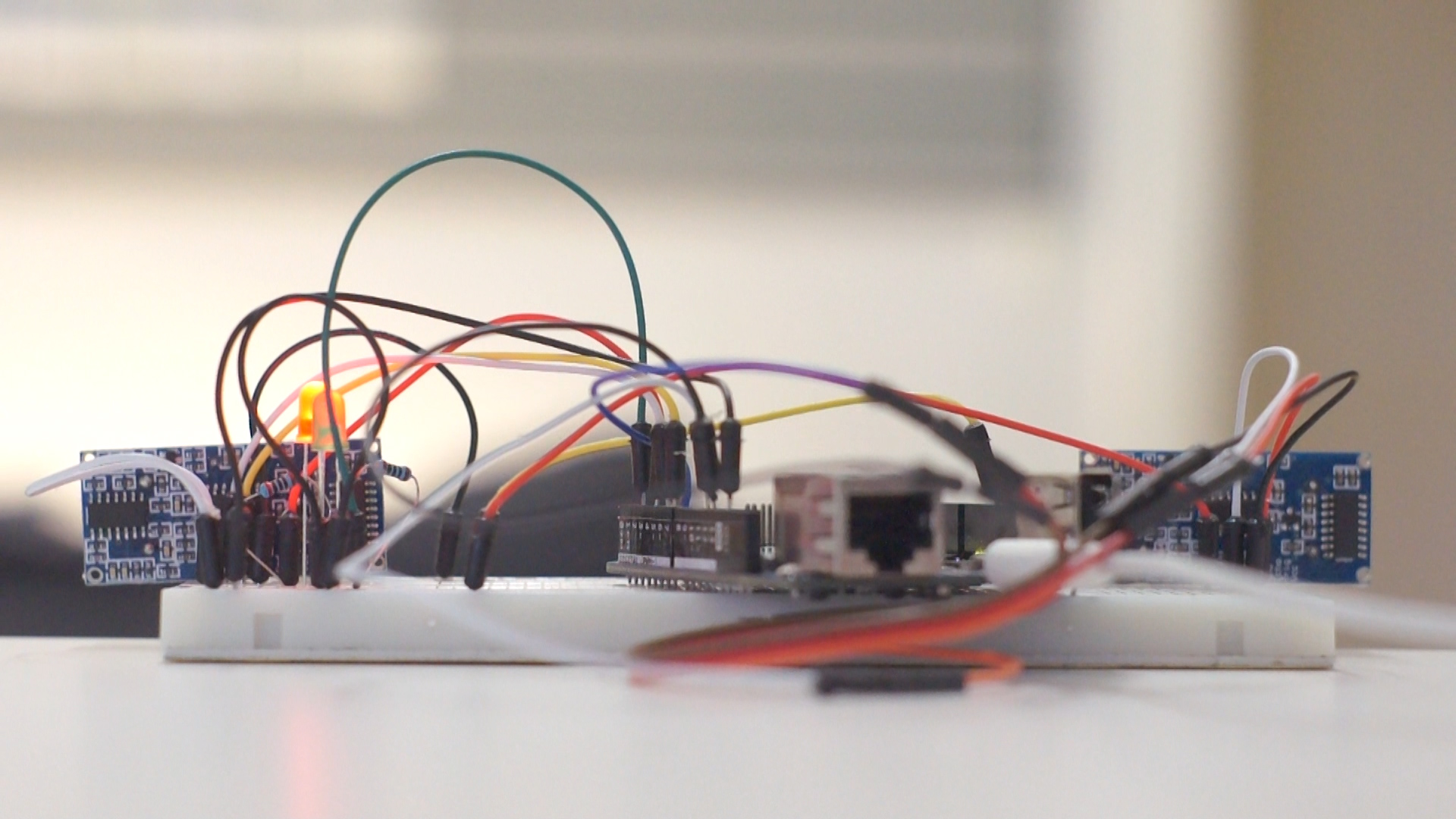 zählwerk is a solution for community projects which have more dedicated members than physical keys. The device determines by using ultrasonic sensors whether people are currently using the office space or whether you need to organise a key for it. In this team project I was responsible for the hardware design and the web development, meaning the development of the hardware board with the sensors, coding the Arduino Board which pushes die sensor data to a webserver which is running an analytic script and provides an API for a visual representation in form of website.

In cooperation with Maximilian Bornmann (Concept and Visual Appearance) – https://bornmann.cc 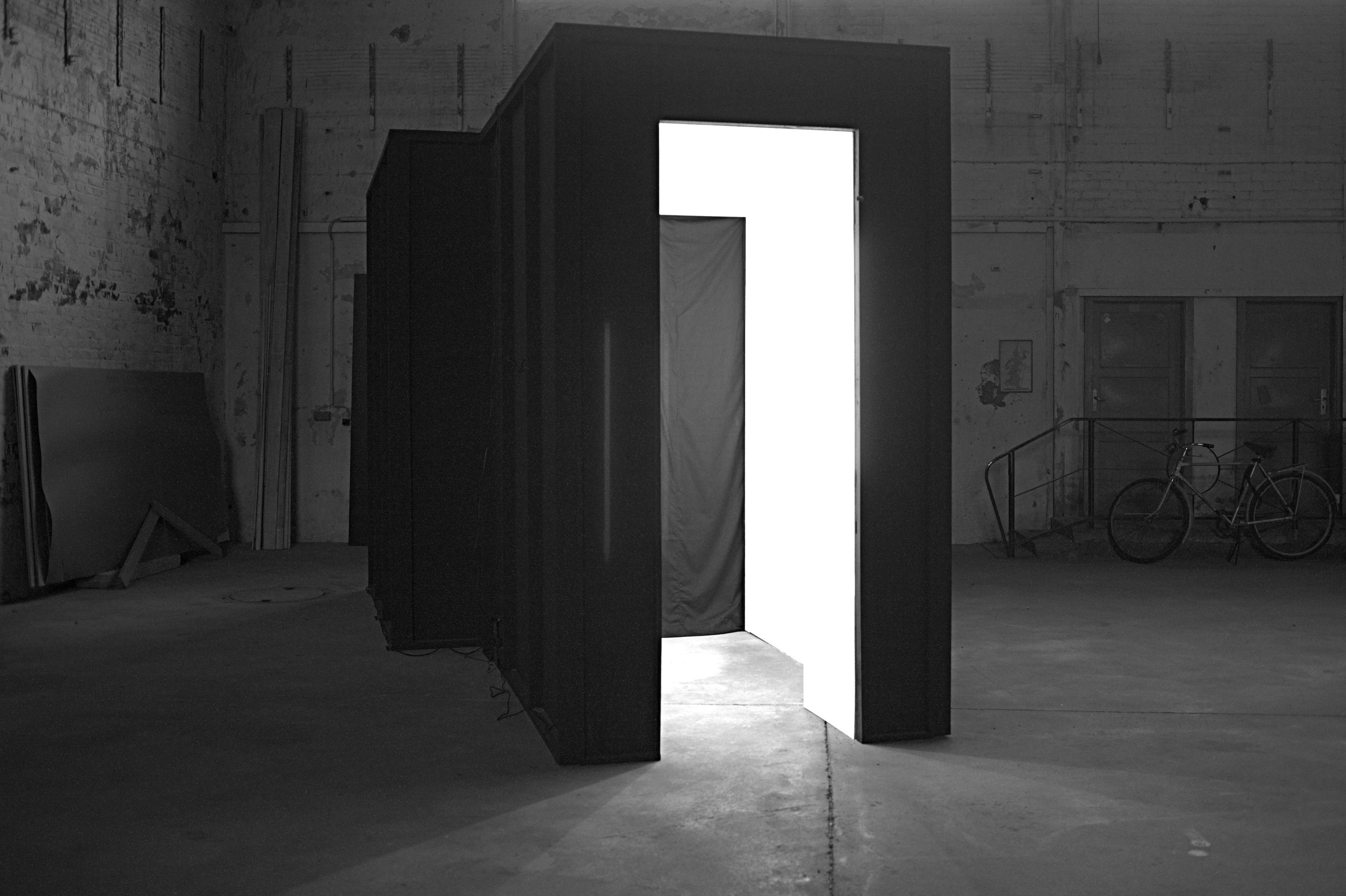 Benezio is an art project of Bennet Seuss. It’s a mind game with a room which is dark and isolated from the exterior. The only thing in the room is a blue glowing screen which says "This screen is will ever be blue". When leaving the room the visitor sees a sign which asserts the opposite by saying "If nobody is in the room, the screen turns red". The installation is supposed to question which statement we believe in and which one represents the truth to us.

I modified the zählwerk project for the technical implementation. 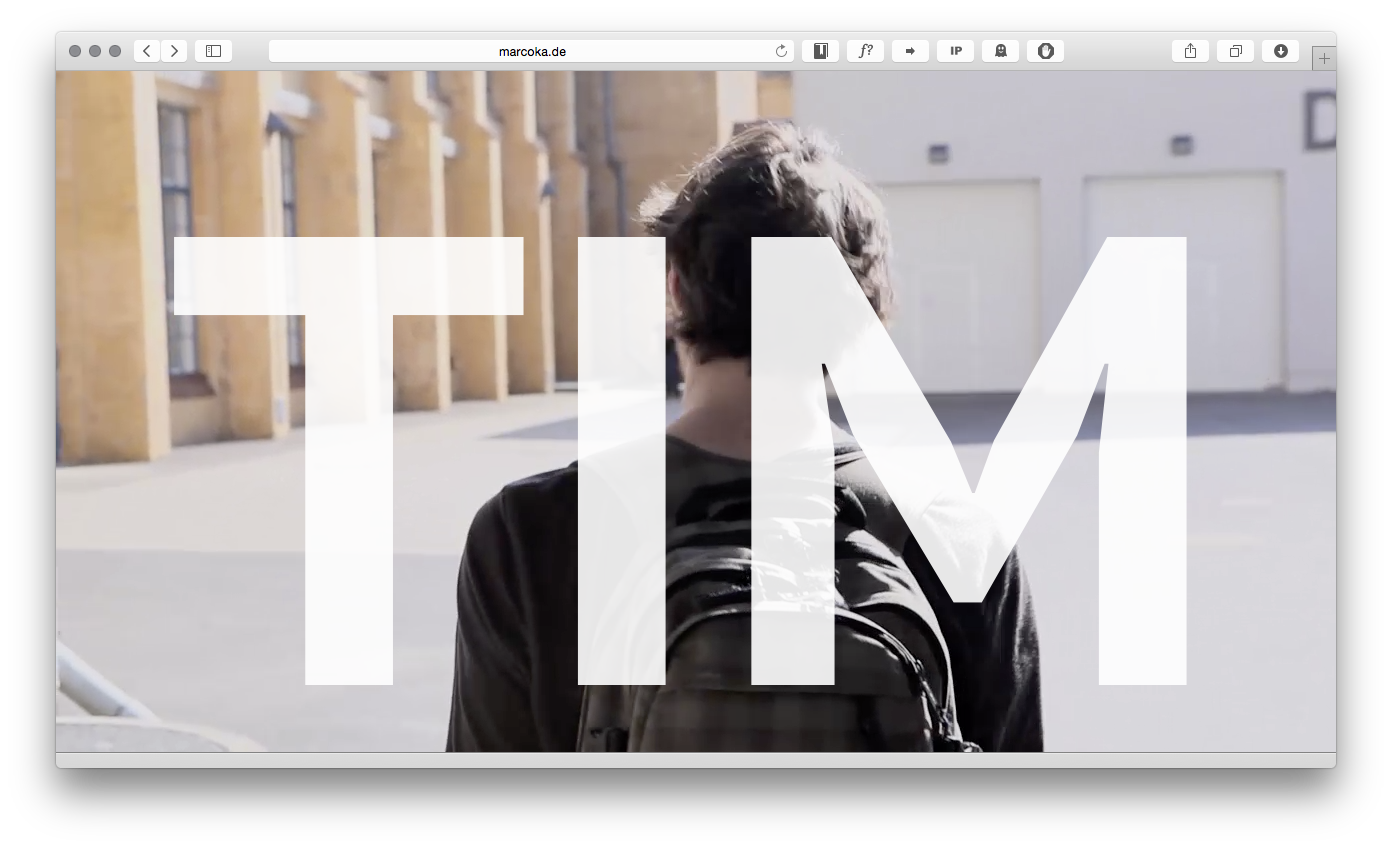 TIM is an interactive video portrait about a friend of mine. The whole project is made by myself. I used popcorn.js for the interactive representation in the browser, to integrate hyperlinks to websites with further information about the topics which are discussed parallel in the video interview and also modified the typography to react responsive to the size of the browser window. 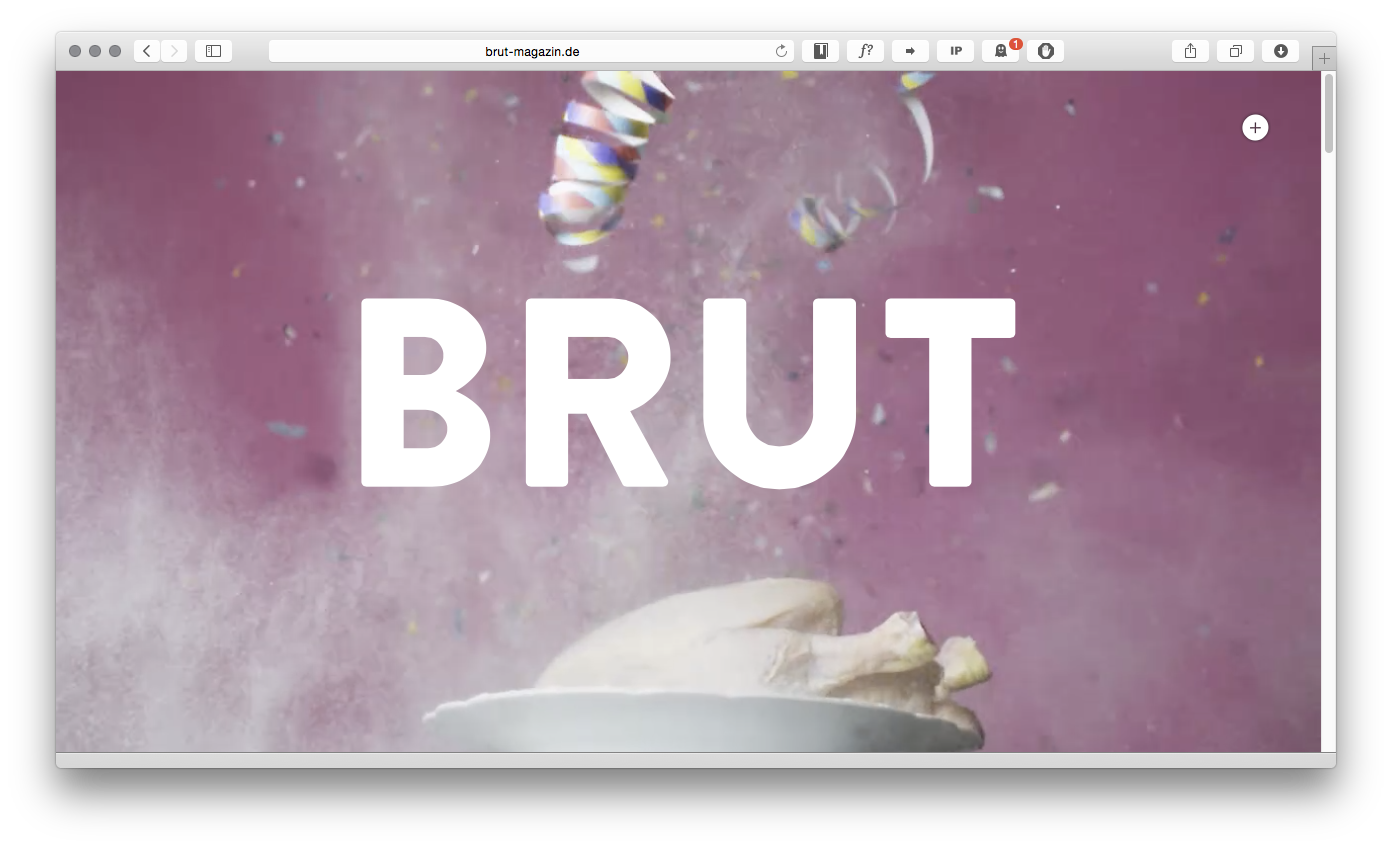 BRUT-Magazin is a semester project in the second study year. The goal is to produce a new version of the hypervideo magazine. My primary role was in the tech team where I was responsible for establishing a semantic search to connect the new and old contents more intuitive.
Every student also participated in the production of new video content which included recording video and audio scenes, planning and conducting interviews and in the end video cutting the footage for the final magazine. 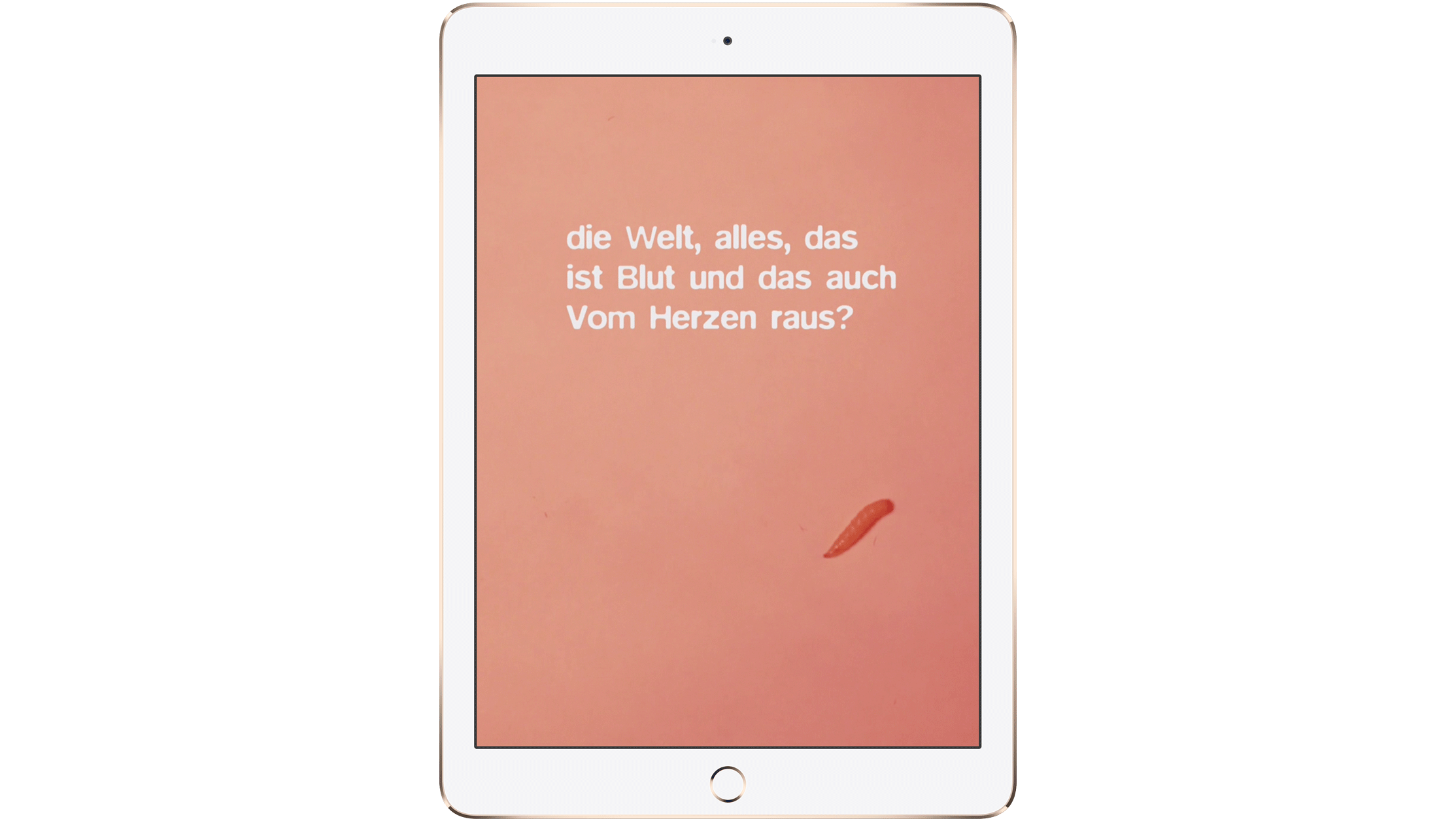 »Inter View« is an attempt to find a purely visual expression for the lyrical layer of a song by the austrian artist "Soap&Skin". The experimental combination of typography, video and animation orientates itself by the originally belonging music of the song. The visual language is based on the textual content and supports the base atmosphere of the song: the human emotion of disgust.
The result became an interpretation which works also disconnected from the instrumental layer.
Main requirement of this university project was to use the ebook publishing plugin mag+ where we rapidly had the urge to push its boundaries the achieve a satisfying result.

In cooperation with Tim Verhaert – https://vimeo.com/verhaert 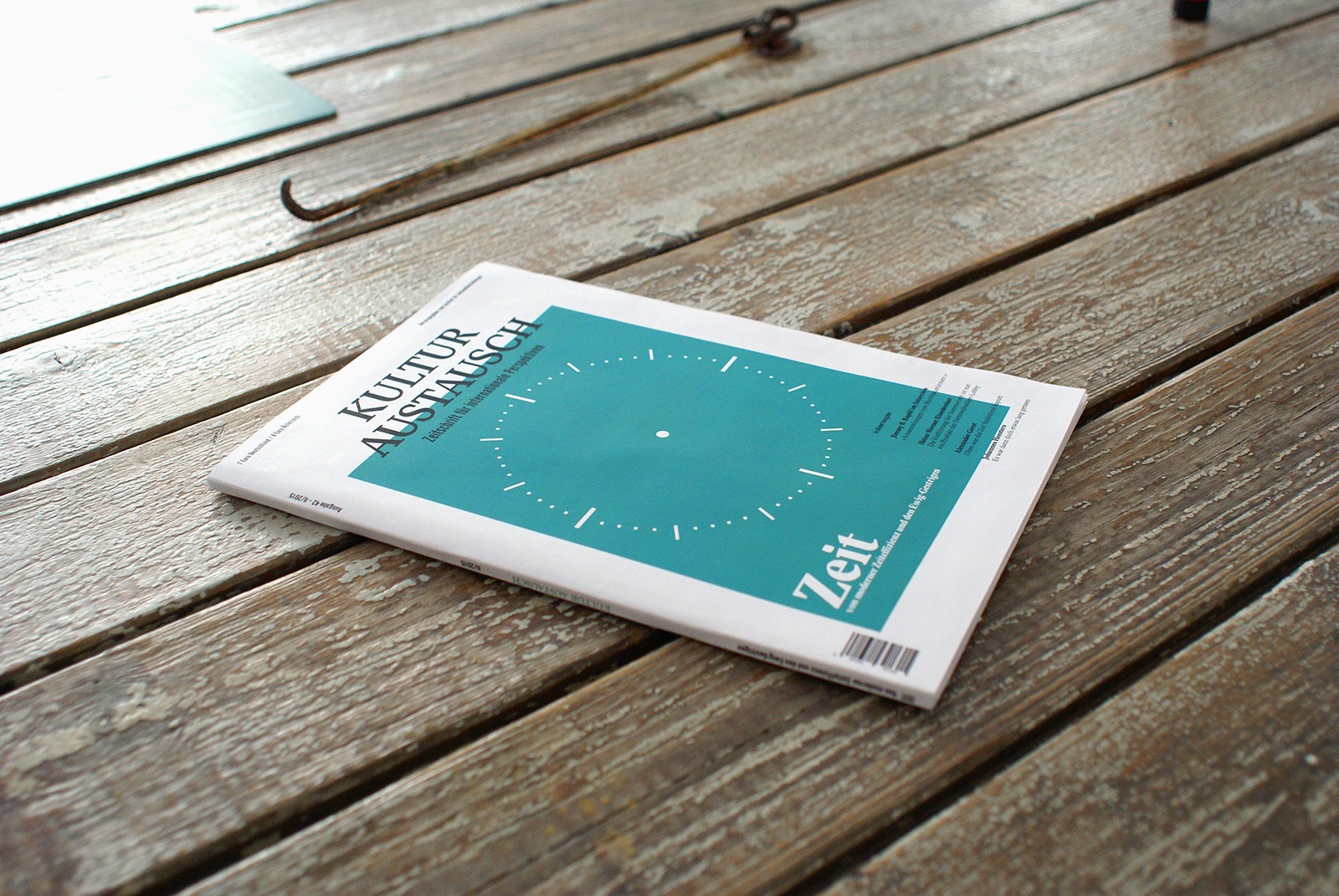 This semester project was about redesigning the german print magazin "Kulturaustausch" which reports monthly about topics of international affairs and topics.
We reworked the magazine part and also the cover page.
The body text is using the GT Sectra in the different styles of this typeface and for establishing a contrast we decided to use the Alternative Gothic in the headlines. Our goal was to lighten the big amounts of texts which in the former version used to look more like scientifical papers with more white space and an optimised hierarchical structure.

In cooperation with Thomas Mrasek 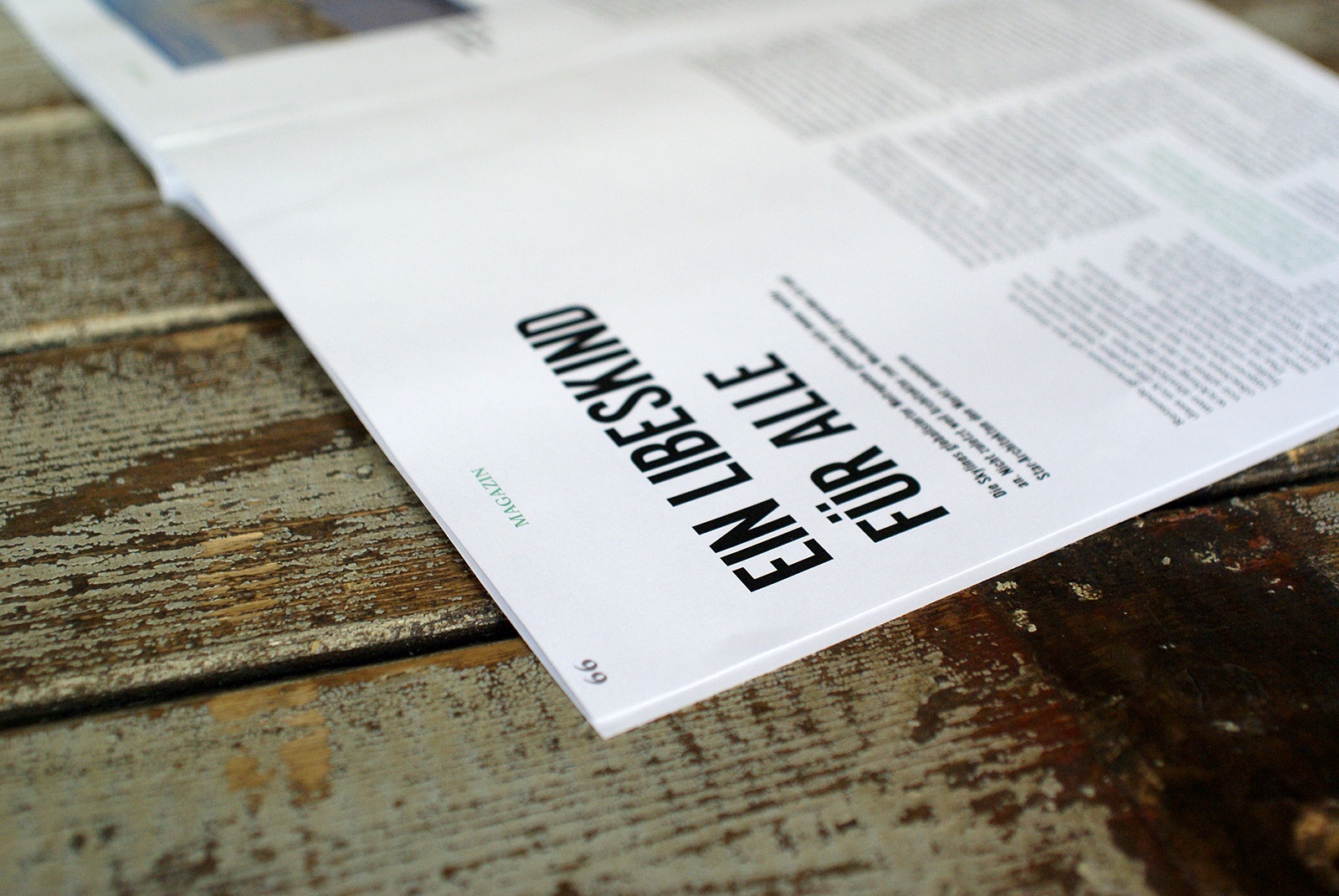 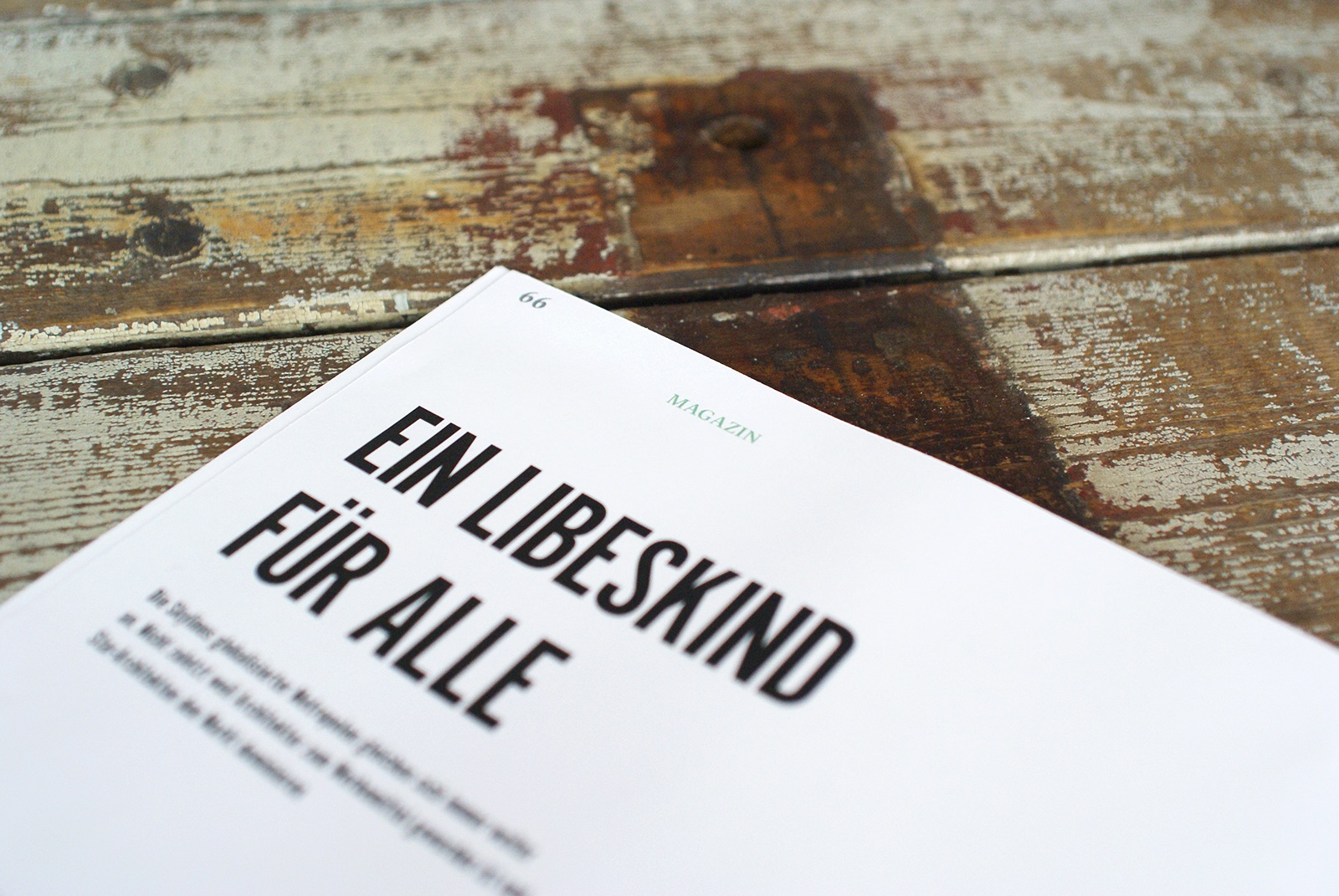 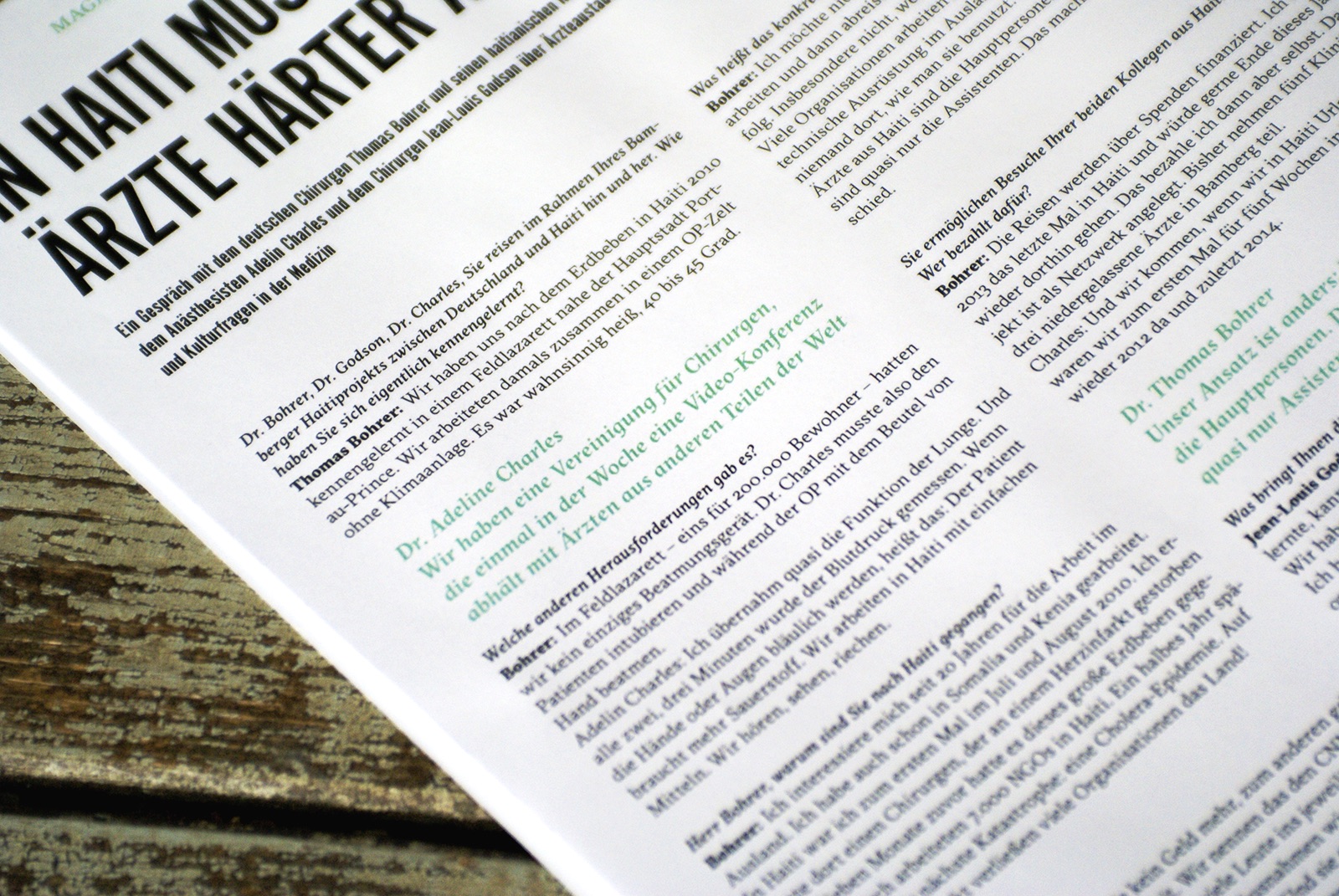 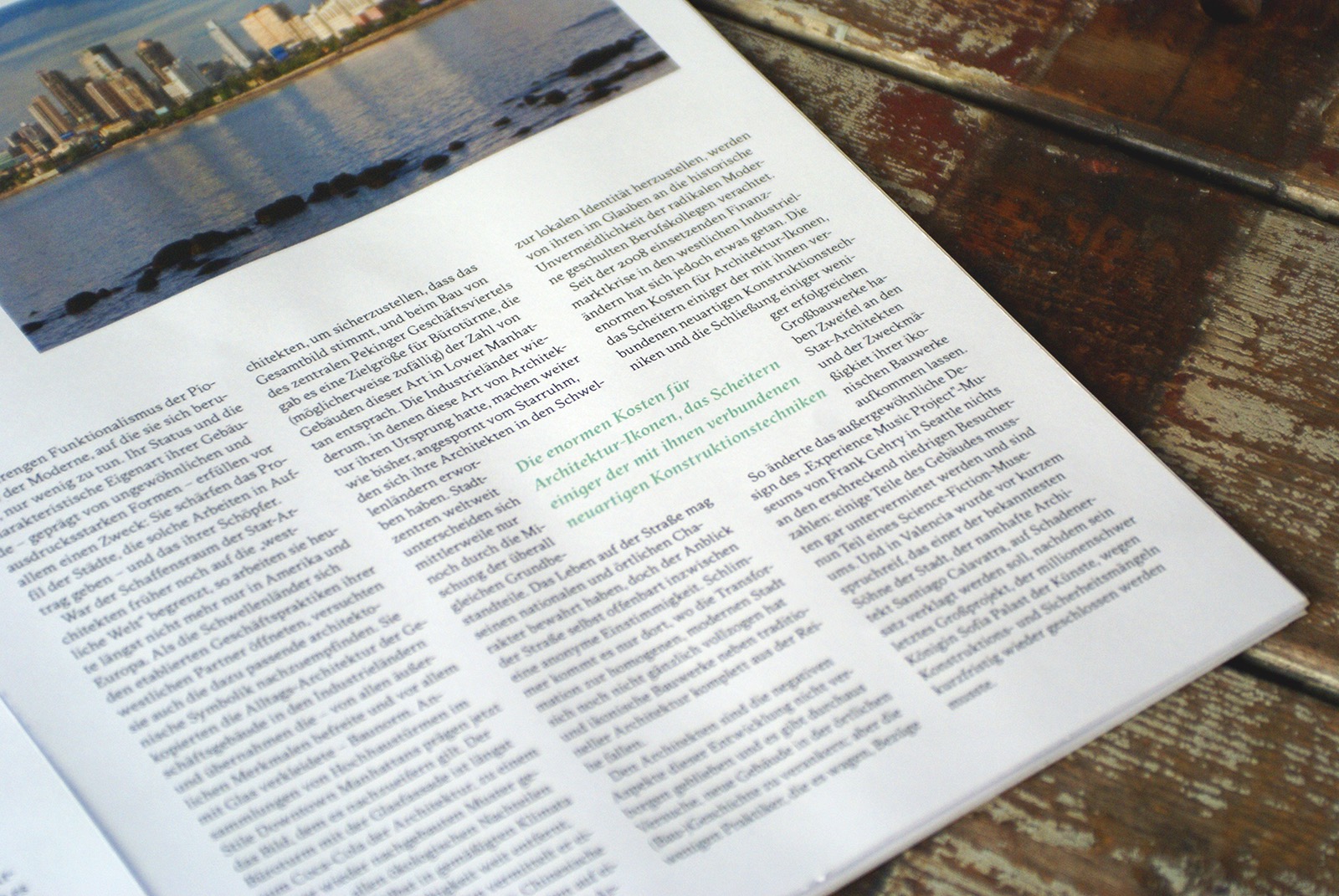